Griffith Williams was employed as a Trimmer/Greaser on board RMS Leinster when she was torpedoed on 10 October 1918. He was 49 when he was lost with the ship and had lived with his large family at 1 Henry Street, Holyhead.

His silver watch was recovered from his body and records the time when RMS Leinster sunk below the waves. It is on display at Holyhead Maritime Museum. 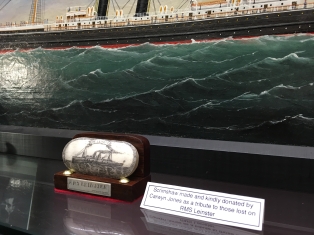 This modern scrimshaw was made and kindly donated to the Holyhead Maritime Museum by local artist, Carwyn Jones, as a tribute to those lost on RMS Leinster.

The piece has now been added to the display at the Museum for visitors to appreciate. It’s particularly good to see this almost forgotten art form revived so expertly by Carwyn.

According to records, and listed in Philip Lecane’s book, – ‘Torpedoed’, there were at least 21 Royal Welsh Fusiliers on board RMS Leinster – four officers and 17 men. They mainly served with the 3rd Battalion, RWF. Two officers and 12 of the men were lost.

We would be pleased to make contact with relatives of any of those listed below.

Pte. Samuel Langfield, aged 34.
90490 3rd Bn. RWF.
Born at Oldham and enlisted at Oldham in May 1918.
Son of Eliza Langfield, of 111, Heyside, Shaw, Lancs., and the late Abel Langfield; husband of Nancy Langfield (nee Holding). Married in 1910 at Oldham. Previously employed as a Cotton Spinner.
Commemorated on the Hollybrook Memorial Panel 57.

Pte. David Rowlands, aged 22.
61116, 3rd Bn. RWF.
Born at Llanfihangel , Anglesey. He was the son of Owen and Ann Rowlands (nee Pritchard) of Llerniau, Llanfigael. Enlisted at Menai Bridge. In 1901 he lived with his extended family at  Llerniau, with 3 brothers and 2 sisters. At the house was his maternal grandfather, William Pritchard a Shoemaker. In 1911 he was employed as a Cowman Nant Bychan Farm, Llanallgo, nr Moelfre, Anglesey, aged 15.
Commemorated on the Hollybrook Memorial Panel 58

Those of the RWF that survived. 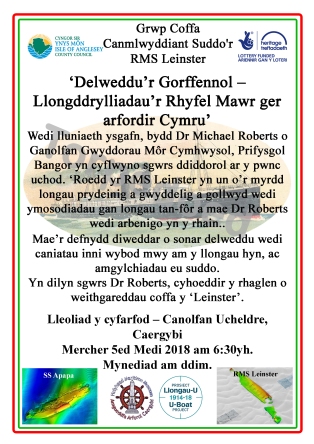 There will be a public launch of the RMS Leinster Centenary Commemoration on Wednesday, 5 September at the Ucheldre Centre, Holyhead. The evening will commence with light refreshments at 6.30pm, followed by an illustrated talk by Dr. Michael Roberts of Bangor University.

Dr. Roberts has spent much time locating and image scanning many of the WW1 wrecks around the Welsh coast, particularly those close to Anglesey. His talk will be a fascinating insight into how many ships were lost to enemy U-boats during the Great War. He will also make reference to the wreck of RMS Leinster, which lies in Irish waters.

Information regarding other events planned for October 2018 will also to presented.

Efforts have been made to locate as many relatives as possible of those on board the Mailboat on 10 October 1918 and to inform them of the commemoration. If you are a relative we would very much like you to make contact.

The event is open to the public and is free to attend.

Although not essential, we would appreciate confirmation of attendance by emailing rmsleinster100@gmail.com.

These are the burial records for those of the crew whose bodies were recovered and returned to Holyhead for interment. Among the listing you will see the burial record for John Pritchard, who was not on RMS Leinster but was lost from his ship following a collision. This is a reminder that life at sea was never without its dangers. 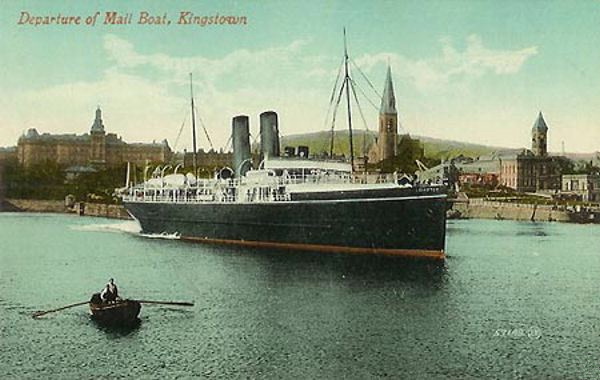 This is the story of the one of the youngest servicemen killed during WW1. Tommy Woodgate came from Callan, Co Kilkenny and had joined the newly formed RAF about 6 months earlier. He was returning to the UK from leave when he was lost on RMS Leinster. He is buried at Grangegorman Military Cemetery in Dublin.