Over a month after the sinking of the RMS Leinster four bodies were washed up on Anglesey’s west coast. As can be seen from the newspaper report they could not be identified. Three are buried at Llanfaelog (probably together) and one, a woman, at Aberfraw. All graves are unmarked.

Whilst a large number of bodies were recovered and buried in Ireland, others were found at the Isle of Man and further north on the west coast of Scotland. Many more were never found. Their grave remains the sea.

The newspaper report mentions keys found on the body of the man in the blue serge suit. It would seem that these did not help identify the body at the time. 100 years on it would be good to try and solve the mystery. Any suggestions would be gratefully received.

The newspaper report is from the North Wales Chronicle of 15 November 1918. We are grateful to Clive Hughes for bringing it to our attention.

William R Thomas, aged 16, was a survivor of the loss of RMS Leinster. He was born at Holyhead and was employed as an Under Steward.

As part of the centenary commemoration efforts are being made to clearly identify all those on board at the time of the tragedy. The National Archive contains records of 1.1million Merchant Seamen. Between 1918 and 1921 CR10 Record Cards were introduced which contain personal details and photographs.

The cards shown above are of two young seamen from Holyhead of similar age. It is possible that one of these could be the William R Thomas who survived RMS Leinster. We are looking for present day relatives who could possibly help identify William R Thomas.

The attached ‘Expression of Interest Form’ is for relatives of those connected with the loss of RMS Leinster, and other interested parties, who wish to receive an invitation to attend the commemoration at Dún Laoghaire on 10th October 2018.

The closing date for receipt of forms is Friday, 29th June 2018. 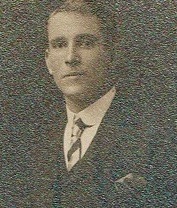 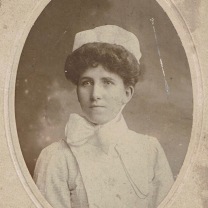 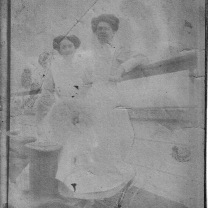 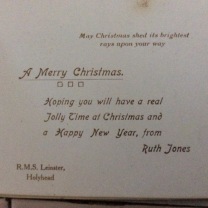 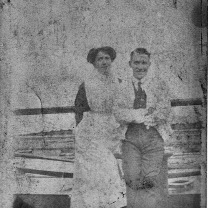 These photographs tell a story of friendship. Over 100 years ago those pictured served on the Mail Boats of the City of Dublin Steam Packet Company, plying back and forth from Holyhead to Kingstown (Dun Laoghaire). The two ladies – Ellen Cooke and Ruth Jones were Stewardesses. The gentleman, Joseph Dodson Inglis, was a Steward.

Ruth Jones (top right) was from Holyhead, but born at Birkenhead. She initially trained as a Nurse in Manchester before joining the company in 1909. She left in 1912 to get married. She eventually moved to the USA with her husband and raised a family. She is pictured (bottom right) with Joseph Inglis the day before she left the service.

Ellen Cooke (top left) was born at Holyhead and joined the company in 1906 serving for many years. She is pictured with Ruth Jones (bottom left). It is believed that her full name was Sarah Ellen Cooke and she married Thomas Henry Sadler in 1920. Her husband was then employed as a Ticket Collector for the company. They later became proprietors of the ‘George Hotel’ at Holyhead. *

Joseph Dodson Inglis (top centre) was born at Dublin. He married Ida Plant at Manchester in 1915 and lived at Newry Street, Holyhead. He was a survivor of the sinking in the English Channel of HMT (RMS) Connaught in March 1917. The vessel was then employed as a Troop Transport, sailing between Southampton and Le Harve, France. Unfortunately he did not survive the sinking of RMS Leinster in October 1918. His grave is the sea.

The Christmas Card was sent by Ruth Jones to her friend Ellen Cooke.

These images have been provided by Philip Lecane of the National Maritime Museum of Ireland, Dun Laoghaire and reproduced with the kind permission of Karen Thaler, the grand-daughter of Ruth Jones.

The Holyhead War Memorial (The Cenotaph) was unveiled in September 1923. It serves to commemorate 288 men and women from the town lost during the Great War of 1914 – 1918 and 140 from the Second World War, 1939 – 1945. Guardsman David Williams, lost during the Falklands conflict, is also commemorated.

The twenty-five who perished on RMS Leinster are listed on a single panel. Two others are included on the Army panel – Lieutenant William James Singleton and Private Owen Hughes.

Lady Alexandra Phyllis Hamilton, 42, was an unmarried member of a well known British aristocratic family. Her father, Sir James Hamilton, was the Duke of Abercorn in the Irish Peerage. She was travelling back to the UK accompanied by the family cook, Mrs Martha Bridge and servant Eleanor Strachan.

When RMS Leinster was sinking it is reported that she gave her lifejacket to her servant, saying “I’m a strong swimmer”. Sadly all three ladies perished. Only the body of Martha Bridge, a spinster aged 27, was recovered for burial.

The Hamilton family was connected by marriage to the Spencer family. Lady Alexandra Phyllis Hamilton was the the Great-Grand Aunt of Lady Diana Spencer, Princess of Wales and also a second cousin of Winston Churchill.

Photograph published in the Leeds Mercury of 14 October 1918 (findmypast website).