The loss of RMS Leinster was discussed a number of times at Parliament after the armistice of 1918. Questions were asked about the lack of naval escort on the day. The government stuck by their reasoning that the Leinster’s speed was enough to protect her. They also cited the bad weather that would have reduced the ability of naval vessels to keep up with the ship. The government continued to refuse to have an official inquiry into the tragedy.

The extract below, from Hansard in June 1919, covers an exchange between Sir Aukland Geddes, President of the Board of Trade and Sir Owen Thomas, MP for Anglesey. Reference is made to the lack of proper compensation for Mrs Williams, widow of Head Stoker, Thomas Williams, of 18 St. Cybi Street, Holyhead.

Captain Redmond, MP for the City of Wexford, makes a comparison between the loss of the Lusitania and Leinster in respect of the need for an inquiry. 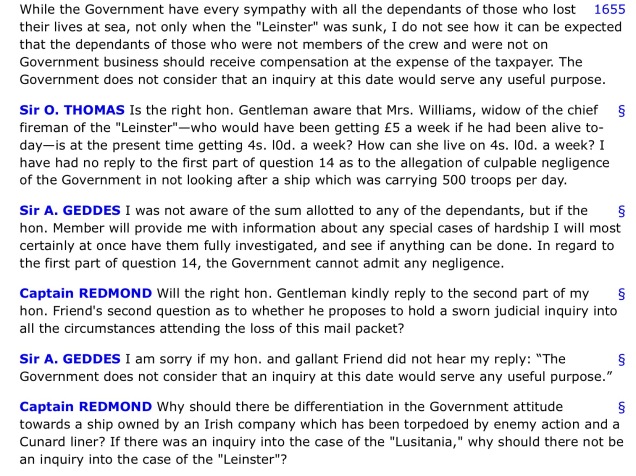