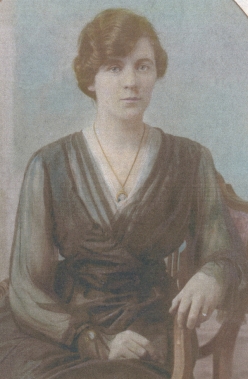 Louisa was born at Holyhead in 1896. She left Park School at 15 to train as a nurse before joining the City of Dublin Steam Packet Company as a Stewardess in 1914. Two of her sisters were similarly employed at the company. She lived with her family at 5 Fair View, Holyhead. One of nine children, she was only 22 when she lost her life.

She was not scheduled to work that day but sailed in place of one of her sisters who was ill. In all the confusion of a sinking ship, Louisa Parry, not thinking of her own safety, went to a lower deck to help passengers but became trapped in a cabin with a mother and her child; crew members were unable to open the door due to the angle of the ship and the pressure of the water against it.

The photograph of Louisa was taken shortly before her death. It will be noticed that she wears a ring on her engagement finger. It is believed that she was engaged to be married to an Army Officer.

The Memorial Plaque bearing her name is a treasured family reminder of this brave lady. The plaque is currently on loan to the Holyhead Maritime Museum and available to view as part of the museum’s RMS Leinster display.